M is for Mulan and Merida: Modern Maidens

Well A to Z Bloggers, we've made it to the letter "M" , the official halfway mark of the challenge. Feeling tired yet? I certainly am, but I'm also having a blast! I hope everyone else is as well.

But now, back to blogging.

Now, for those of you who are new to my blog, I've spent many years criticizing Disney for their backwards plots and un-feminist attitudes (which pains me greatly because I was raised on Disney and still know all the words to just about every Disney song ever written). But I've been thrilled with the recent shift toward more headstrong women that fight the constraints of traditional gender roles. In fact, the most recent princess movie – Frozen – is all about finding oneself and the bonds of sisterly love.

But today I want to talk about two Disney princesses who paved the way for this new trend. Two princesses who are both more interested in pursuing their dreams than finding a husband, despite the constant demands otherwise. Two of my favorite modern maidens, Mulan and Merida.

Mulan was definitely one of the very first Disney princesses to express any sense of modernity (and considering she hails from imperial China, that's impressive). She's a spirited tomboy who longs to bring honor to her family, and after the Huns attack when the Chinese military demands that one man from each family join the army, Mulan cuts off her hair (and as we all know, long flowing hair is the mark of a Disney princess), disguises herself as a man and takes the place of her ailing father. There she learns to fight, using her intelligence and quick thinking to make up for her lack of physical strength. Though she's eventually unmasked as a female and expelled from the army, she still finds a way to save China . . . as a girl. This is a far cry from her princess predecessors like Snow White and Aurora, who can't even manage to save themselves from a single adversary, let alone an entire country from invading forces. She's definitely a woman to look up to. 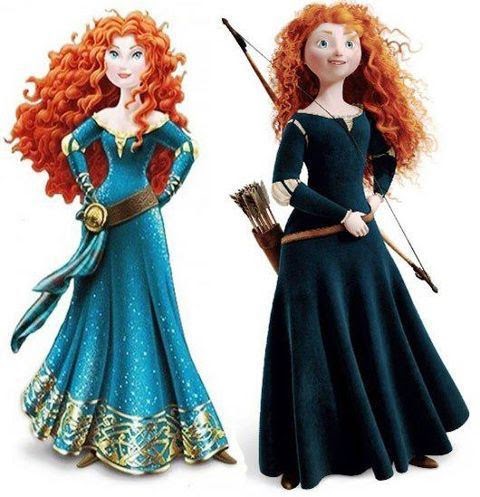 And then there's the red-headed Scottish lassie. One of the things I love most about Merida is the fact that she is a young girl with hair problems rather than the tall, stacked blond with the tiny waste we see in so many Disney films. And more, I love how much people appreciate that about her. When the movie came out and Disney released an image of Merida in the Disney Princess Line, they "tweaked" her so she had longer legs and a more shapely (aka. womanly) figure. To which parents and Brave fans across the nation went absolutely wild. They felt very protective of Merida's youth, rejecting the new version and forcing Disney to remove the redesign from the website.

And may I say, "bravo"! It's about time we saw a Disney princess who looked her age. And what's more, it's wonderful to finally have a princess movie that completely avoids the romance plot line. Even Mulan, Pocohantas, The Princess and the Frog and Frozen – arguably the most modern and feminist of the princess films – can't get away with out a little romance. But Brave stands out as a movie about familial, rather than romantic, love.