Agents, and Manuscripts, and Edits! Oh My!

Several of my friends and family have responded to my August 16th "Down the Rabbit Hole" blog questioning what three events inspired the post. While the first two are personal and will therefore remain anonymous, the third event is part of the professional sphere, and now that it’s official, I see no harm in sharing. So, in case you’re interested and have not already heard via my many emails, texts, Facebook posts and phone calls . . .

I met my new agent – Josh Getzler of Hannigan Salky Getzler Agency – at the Houston Writer’s Conference in May 2011, where he very generously squeezed me in as his last interview on the last day of the conference. Lucky for me, he laughed with me over the oh-so-long title of my (then incomplete) manuscript, and asked me to send it his way as soon as I completed it. I assured him, not quite believing it myself, that it would be finished by the end of the month.

After four weeks locked in my room with no outside contact and even less sleep, I finally completed it and sent it his way on June 2. And thus began the waiting game (something which many of my amazingly talented writer friends are still pulling their hair over). But, after two months of torture, I finally heard back. Imagine my shock when Josh (my favorite of the four agents I interviewed with at the conference), told me he was interested in my work and wanted to schedule a phone conference. (P.S. I apologize to my friends and family members who had to deal with me while I waited to hear whether he wanted to represent me or not. To say I was a basket case would be the understatement of the century).

But, after one amazing phone conference and two days of waiting for the official contract to come in, and as of August 17, 2011, I am officially a represented author! 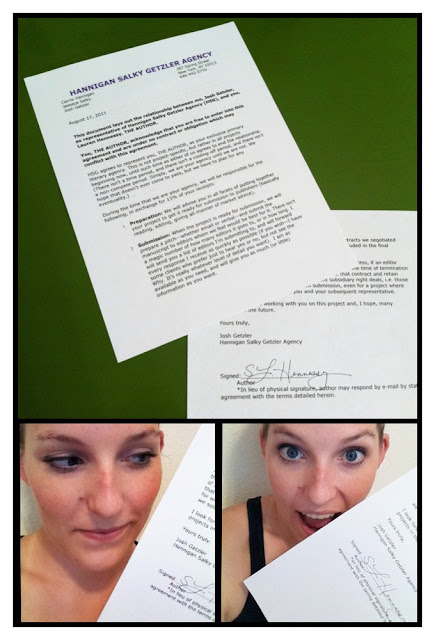 Needless to say, it still hasn’t quite sunk in. Unfortunately, after the celebrating and haze of jubilation finally lifted, I realized how much editing I have to do before Josh begins sending my manuscript off to potential publishers. We’re looking to have it ready by late fall, so if you don’t hear from me much in the next few months, be patient . . .

But, for those of you who are interested in learning more about my new awesome agent, check him out:

P.S. Check out the names under the heading ‘Leading Clients’!!!

The other day a member of the Houston Writer’s Guild sent me an email with a list of the “top 100 books to read before you die”. As I perused the list, I realized that there are many books on it that I’ve always mean to read but never got around to. There are even more books that I read so long ago that I barely remember them (or "read" for summer homework in high school when I was more interested in going to the beach). So, I’ve decided to take on a new project.

I plan on reading (or rereading) every book on this list that I haven’t opened in the last five years. Even the ones that I really hated the first time (that’s right Hemmingway – I’m talking to you).

For those of you who are interested, here’s the complete list. Furthermore, if there are any books not on the list that someone feels should be, I welcome the addition. I personally find it inexcusable that Dante’s Inferno, Paradise Lost and The Zombie Survival Guide are missing – but that’s neither here nor there. So for now, these are the books that will be adorning my nightstand for the next few months... 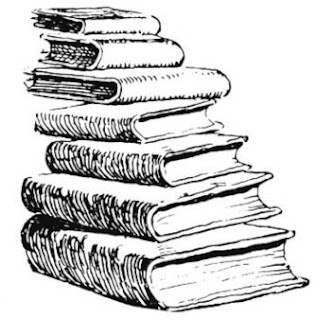 1. Pride and Prejudice - Jane Austen
2. The Lord of the Rings - JRR Tolkien

Down the Rabbit Hole

They say good things happen in threes – and in the past few months I’ve started to believe it. While I won’t say exactly what those three things are (I also believe in jinxes), I will say that three very amazing things have happened to me in the past three (that’s right, three again) months. Maybe the number three really is magical. Like a fairy tale, I’ve been granted three wishes . . .

The truth is, I’ve begun to feel a little like Alice, following the white rabbit down the rabbit hole and stumbling into an amazing new world. It’s hard to believe it’s all real and I can’t help wondering when I’m going to wake up and realize it was all a dream. But until that happens I’m going to enjoy my time in Wonderland. 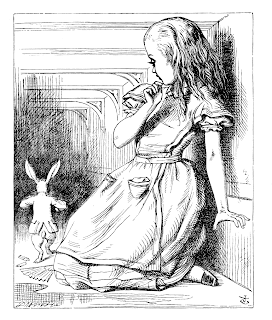 The other day my parents sent me an article from the Wall Street Journal written by Brian M. Carney ('Unraveling the Mysteries of Murderous Minds'). The basis of the article is Dr. Theodore Dalrymple’s (aka. Anthony Daniels, a psychiatrist and doctor in Britain’s prison systems for over fifteen years) discussion of the psychological reasoning behind Anders Behring Breivik’s Norway shooting. He explains that there’s a general fascination and desire to “understand” atrocities like this – on both a personal and political level. However, he warns us that an attempt to “figure out” criminals and understand their motivations can lead to a misguided “statistical generality”.

Dalrymple argues that "‘you examine [Breivik] and you come to the conclusion that this, that and the other factor went to create the situation. You wouldn't have any more than a statistical generality.’ But if that statistical correlation could be verified, could it lead to ‘locking up people before they've done anything’?”

Furthermore, Dalrymple stated that at one point, “the British government . . . wanted doctors to speculate on what people might do” and use this psychological insight to “offer law enforcement their views about who was likely to become dangerous”.

Does this sound familiar to anyone?

To classical sci-fi (and Tom Cruise) fans it will. The use of psychological mapping to anticipate crime and assist in the pre-identification of criminals Dalrymple discusses sounds remarkably like Philip K. Dick’s Precrime system in the 1956 short story The Minority Report. 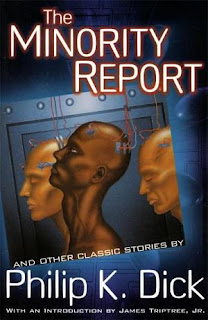 For those who are not familiar with Philip K. Dick’s work, the plot of The Minority Report centers around the belief that if we can anticipate crime, we can prevent it. In the story, “Precrime” is a government system set up to eliminate crime before it happens through the employment of three “precogs” (human beings with a talent for precognition). Their ability to forsee criminal events is so effective that Precrime “cut down felonies by ninety-nine and decimal point eight percent”.

However, there’s just one problem . . . the three precogs do not always see the same vision. In the event that differences occur, computers take their precognitions and synthesize them into a majority (the two closest visions) and minority (the dissenting vision) report, so the Precrime unit can proceed in its systematic eradication of crime without concern for the human ability to adapt and change according to their own free will.

Thus the story suggests that the ability to predict and prevent crime before it happens is deeply flawed. In the past when I’ve read Dick’s story (or watched Spielberg’s somewhat bastardized version), I always marveled at this defective penal system. So imagine my surprise – and utter horror – to find that, according to Dalrymple, governments have already taking steps in the same direction. Could it be that our future holds its own version of a Precrime division, headed by a team of government mandated psychologists, sociobiologists and neuroscientists (in place of precogs)?

I’d like to think we’re smarter than that. But I’ve been proven wrong before. Just look at our fiscal policies . . .
Posted by S. L. Hennessy at 11:33 AM 5 comments: