My friend Annie texted me in a frenzy last night in order to alert me to the fact that Beauty and the Beast was airing on TV. After a moment of electronically shared glee, she explained that it was her favorite Disney movie because of its devotion to “far-off places, daring sword fights, magic spells and a prince in disguise”. The more I thought about it, the more I agreed – that is an excellent recipe for an incredible story. Which then got me thinking . . . What makes a story great?

As a writer, I’ve spent countless hours contemplating the question and tonight I came to the conclusion that the best kind of story is one that not only has a great plot, a cool setting, and an interesting and relatable protagonist (you know, the generic stuff), but also excels in seven other areas. These areas, which I have – in a fit of genius – categorized and defined for your convenience, will be heretofore known as:

The Seven Ingredients for the Best Story of All Time

1.  Clashes and Skirmishes – Ingredient number one was originally listed as ‘action’; however, I quickly realized that was much too broad a category. What makes a story really stand out is a daring bit of combat. Wizarding duels, a gripping sword fight, two stodgy British men kicking and scratching at one another because they don’t know how to brawl (oh Colin Firth and Hugh Grant, how you amuse us) . . . these are the scenes that make our favorite stories all the more interesting.

2. Something Unexpected – An incredible land hidden on the other side of a seemingly ordinary wardrobe or finding out the government is behind the creation of the story’s villainous monsters. A good story will always find some way to surprise you.

3.  Quirky Side Characters – Though everyone loves the dashing prince and beautiful princess that headline our favorite fairytales, it’s the side characters that make a good story amazing. Inigo Montoya and Fezzik, Clocksworth and Lumier. These are the characters that often steal the show and make a story.

5.  Bad Guy Comeuppance – The one thing everyone loves to see is the bad guy get what’s coming to him. We want to see the evil cheerleader get dumped at the prom and (spoiler!) Lord Voldermort die by his own curse. It’s universally satisfying.

6.  A Whirlwind Adventure –When our lives get too monotonous we all look to books and movies for adventure. The best stories understand and cater to that desire, whether it be a cross-country drive in a broke-down VW bus or following a lost boy past the second star to the left and straight on till morning. In order to make a mere good story a great one, it must have adventure. I say, when in doubt, throw in a pirate kidnapping across the high seas.

7.  Love Story – Last but certainly not least, every great tale needs a love story. I don’t just say this to appeal to the female demographic (though it certainly helps).  But as my friend Julie Tuovi said in one of the first emails she ever sent me, “EVERYONE can relate to that! Even if you haven't had a relationship, you can still relate! Plus, I think relationships – including romantic ones – give you an insight into the characters . . . what drives them, what they want out of life. Gives them depth and makes them more interesting”. And she’s right – most of my favorite books and movies are driven by love stories. Where would the world (and the plot of The Terminator) be without the relationship between Sarah Connor and Kyle Reese? In the hands of the machines, that’s where. But instead Kyle’s love for Sarah sends him back through time where he fathers John Connor, humanity’s savior, thus inspiring one of the greatest movies (and stories) of all time.

Now, if you’re wondering how I came up with this list, here’s how it happened. Like any good scientist, I came up with a theory and went in search of data to back it up. I reviewed some of my favorite movies (such as Serenity/Firefly, Romancing the Stone, The Fifth Element, Pirates of the Caribbean, etc.) and came up with the seven ingredients for an amazing story. However, upon review I found that one story not only possess each of the ingredients, but does it so well it blows all others right out of the water – The Princess Bride. 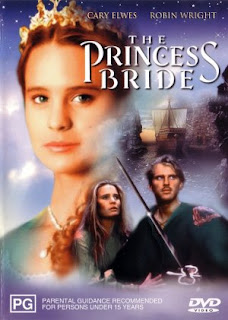 There’s nothing it doesn’t have. Sword fights – Check. Love story – check. Side characters – Miracle Max and his wife Valerie. Check. Witty Dialogue – “Anybody want a peanut?” Check. This is a story that does not fail. I defy anyone to come up with a better one.