Blogging from A to Z Challenge Kick Off

It's finally here! Sunday is the long anticipated kick off of the Blogging A to Z Challenge. It's brought to you by the brilliant minds at Tossing It Out, Amlokiblogs, Alex J. Cavanaugh, Life is Good, Cruising Altitude 2.0,Retro-Zombie,The Warrior Muse,The QQQE, Author Elizabeth Mueller, Pearson Report, No Thought 2 Small, Breakthrough Blogs, and Coming Down The Mountain. 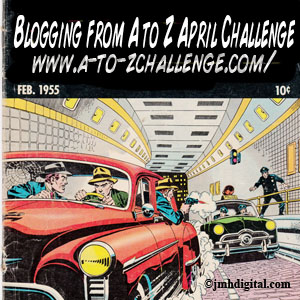 I cannot wait to get started. This is my first year participating, and I'm looking forward to the challenge of posting everyday (except Sundays) for an entire month. While some people have already written all their posts and have them saved in a Blogger folder just waiting to be uploaded,, I prefer the old fashioned method . . . writing them in a frantic panic the night before. Should be lots of fun.

I did, however, do my prep work. I came up with a topic for every letter (apart from N and Q, stupid letters that they are), did all my research (which mostly consisted of movie watching and reading some awesome books), AND decided on my theme! And what is it may you ask? If you know me personally this should come as no surprise, but my theme is --

So stay tuned for 26 (hopefully) awesome posts and lets get ready to blog from A to Z . . . sci-fi style!

I hate to be predictable, but I’ve gotta do it. I simply have to write about . . . 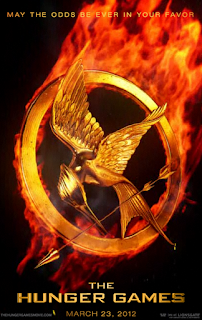 Like everyone else in the world, I went to see The Hunger Games movie this weekend. And I have to say, I loved it. Not surprising since I consider the book the best thing I’ve read since Harry Potter. But still, I was relieved that the film didn’t let me down. However, several of the people (heretofore known as the “Haters”) who went with me didn’t feel the same. Which flat out shocked me.

How could they possibly not like something so clearly AMAZING? My guess is mental deficiency. Or perhaps they’re being paid off by Twilight fans. Regardless, I’d like to round up all these Haters and make THEM fight to the death.

But the one thing I couldn’t shake off were the Hater’s complaints that there were too many aspects within the movie that went unexplained. For example, the three-fingered salute the people of District 12 give Katniss after she’s taken her sister’s place in the Games. When I thought about it, I realized that they were right; it wasn’t ever explained. I would argue that the director assumed that a mature, rational audience would be capable of making the intuitive leap from salute to gesture of honor and support, with a hint of rebellion . . . but perhaps the director (and I) both assumed wrong.

The truth is, The Hunger Games – both movie and film – is an incredibly complex story. Suzanne Collins doesn’t baby her audience, and neither did the film’s director. Perhaps it’s a movie best enjoyed by those who have read the book, and therefore already understand the little nuances the director doesn’t take the time to explain. The movie is, after all, almost 2 ½ hour long . . . though for the record, I would have happily sat through several more hours.

So for all the Haters that argue the movie was too confusing, I would suggest that they just GO READ THE FIGGIN’ BOOK.

I guess that’s the moral of this story aka. blog post. Always, ALWAYS read the book before going to see the movie. No matter how independent the film is from the original text, it always yields more if you’ve read the book first.
Posted by S. L. Hennessy at 10:01 PM 11 comments:

When I was a little girl, I loved the Disney princess movies. Truth be told, I still do. Little Mermaid, Sleeping Beauty, Cinderella – they’re all wonderful. And I’m not ashamed to admit that I spent a lot of time dancing around my house, pretending I was one of them.

However, when I got older and began developing a fascination with superheroes and villains during my teenage years, it occurred to me how limited I’d been in my childhood. As a girl, I’d been steered towards “girly” interests – like the Disney princesses. I had a plethora of tiaras and tutus, but one ever gave me a comic book. Or superhero action figurines.
Now that I’m in my twenties, I’m faced with a slight crisis of identity. When faced with the choice between princesses and superheroes . . . which do I chose? Some might think this a silly concern, but it’s actually come up more than once. And apparently I’m not the only one who feels this way, because a few clever artists came up with a solution. Please let me introduce . . .
The Princess Superhero!!!

Pretty awesome, right? And what's a Superhero Princess without a comic book to chronicle her adventures? 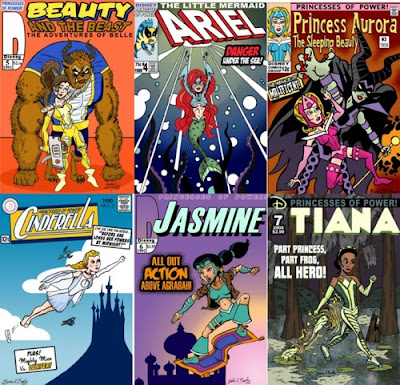 It certainly makes me wish someone would come out with a summer blockbuster film where they all team up, like the Avengers or the Justice League. We could call them Team Tiara! But regardless, I think I've found the solution to my predicament . . . and my next costume idea for Halloween.
Posted by S. L. Hennessy at 4:45 PM 13 comments:

It's that time again . . . the first Wednesday of the month means Insecure Writer's Support Group. 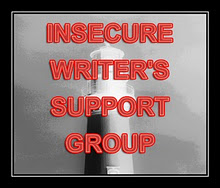 That's right, it's time to discuss my writing insecurities, which frankly, are legion.
Sigh. And those were just my Top 5.
I was thinking of all the tools writers use to help them in their efforts to write the perfect novel. Critique partners, writing courses, seminars, Save the Cat books, heavy drinking . . . uh, just kidding. And then I stumbled across this on iwastesomuchtime.com:

One super expensive Liberal Arts degree and four years of struggling to perfect my novel, and someone finally tells me.