Why is it that the story of Cinderella, the scullery maid who became a princess, remains one of the most popular and beloved of all times? Is it because she stands up to her wicked stepmother?  No.  Because she’s brave and confidant?  Definitely not.  In those respects, Cinderella’s story proves nothing but a disappointment.  She never tells off her scheming step family or fights for her dreams. She meekly accepts her dreary existence and never makes a move to change her lot in life.

Even the end falls short of perfect.  Prince charming doesn’t come to her house, look past the dirt smudges and peasant rags to recognize Cinderella as the beautiful maiden he fell in love with at the ball.  Oh no. He marries her because her foot fits into a tiny glass shoe. Theoretically, he might have ridden off into the sunset with the wrong girl entirely, and the real “love of his life” is someone else with the same size feet wondering what in the hell’s taking her prince so long.

It pains me to write this, as Cinderella was always my favorite Disney movie, but this ‘love story’ is nothing but a nightmare. It gives little girls (and let’s face it, a lot of lonely adults) the false belief that if they wait around long enough, a fairy godmother will come along to sort out their love life. Totally ridiculous. And waiting for prince charming to show up with a sparkly shoe in the right size – any shoe salesman can do that.  I mean, honestly, anyone who stayed in on a Saturday night waiting for a fairy godmother intervention might as well get used to scrubbing floors and singing into their soap-bubble reflection. Alone.

The other day I was going through some old notes on Plato’s Republic and began thinking about utopias. There are many different kinds of theoretical utopias, from those centered on harmony with nature to spiritual utopias where all religions are united together in a perfect shared faith. Still, the general discourse revolves around a place or society free of hate, violence, bigotry, and jealousy with perfection in law, politics, social environment, etc.

However, there’s a general belief that all utopian societies are unobtainable. The encyclopedia describes it as a place with “seemingly perfect conditions” that tends to be “impossibly idealistic”. This idealism stems from the naïve assumption that human beings will ever agree upon a perfect “social environment” or political system, and an even more naïve belief that mankind, with its overwhelmingly diverse spectrum of beliefs, could ever be free of hate or disgust. We strive for individualism – a healthy part of self-identity formation – but it is not without its drawbacks. Individuality forms when we define ourselves against something or someone else. Cheerleaders wear pink – I am not a cheerleader, therefore I wear black, and so on. However, where difference occurs so too does derision and bigotry. One simply does not exist without the other.


So really, the only way to create a utopia is to do away with individualism. Over the past centuries we have seen several attempts at this. The chief architects of these attempted societies can also be called by another name – dictator. Known for the use of extreme methods (like genocide) to eradicate difference, what these leaders strive for is nothing short of a nightmare. But that aside, what is a world without individualism? That sounds more akin to a dystopia than a utopia. A dystopia, also known as the counter or anti-utopia, is a society which has evolved into a negative version of a utopia, or a utopian society with at least one fatal flaw. Typical dystopian societies are characterized by a repressive and controlling state where people are alienated and individuality smothered. While it is generally understood that utopias are satirical and used to critique a real life place – for example, many believe that Thomas More’s Utopia was meant as a commentary on England – dystopias, on the other hand, act more as cautionary tales when we, the imperfect human race, strive for an idyllic utopian society.


Perhaps it’s the cynic in me, but I find that the line between utopia and dystopia awfully blurred. Whether it’s my disbelief that mankind can ever live peacefully under one shared belief, or my fear that its success would be at the expense of what makes us interesting and unique, I remain wary of utopian advocates.
Posted by S. L. Hennessy at 11:10 AM 1 comment:

Many people assume that, like doctors, all writers have god complexes. And it’s an easy assumption to make. Writers create whole worlds from scratch, filling in every building and political belief, character and motivation.

But there’s one thing people don’t always know about writing – that sometimes, the characters we create have a mind of their own. You want them to be sad, but they’re funny. You mean for them to hate someone, but they wind up liking them. My friend Julie mentioned that she didn't intend to create a love triangle, it just happened. Characters can be greedy and difficult, and like a child to a parent, they don’t always mind their author’s instructions.

And it’s not just the characters that do what they want – one time I found my entire novel mutinying against me, insisting on changing its plot. It’s an odd feeling, realizing you don’t always have control over the world you created. The truth is, despite a writer’s authorial power, occasionally the stories control us. You can yell, and kick and scream, insisting on getting your way . . . or knuckle under and do what your novel wants you to do.

Still, religious philosophy dictates that God created mankind, and then gave us freewill. Perhaps these autonomous characters’ blatant disregard for our authorial intent merely demonstrates their own exertion of freewill. Maybe writers, like all creators, struggle with the strong, decisive nature of their creations. “God complex” might not be such a bad fit after all.
Posted by S. L. Hennessy at 10:28 AM 1 comment:

To my everlasting regret, I recently got talked into watching the movie Pearl Harbor. Amidst the terrible acting and ridiculous dialog, I also had to deal with a love triangle. Now, I’ve never been the biggest fan of love triangles (and what little love I had for them Nicholas Sparks shot dead), but these love stories set against a war backdrop have become painfully  repetitive. Their plotlines are so formulaic you can practically map them out unseen.

To break it down, man falls for woman, war breaks out, man goes off to war and goes missing –
presumed dead. His best friend/brother comes home to comfort girlfriend. Friend and girlfriend fall in love. Man discovered alive and returns home, only to find his best friend shacked up with his girlfriend. Drama, drama, drama.

I’m not saying all love triangles, or even all war-themed love triangles, are bad. The English Patient, Doctor Zhivago and Casablanca pulled it off with relative success. But just once it would be nice if the presumed dead first love would just kick it during the war. Or better yet, kill off the hussy who didn’t bother to make sure that the love of her life wasn’t really alive and in a coma somewhere. So please writers, for the love of god – come up with a new plot.
Posted by S. L. Hennessy at 7:08 AM 2 comments:

The Perils of Editing

Last night at 2:30 a.m., I completed my novel (applause please). However, as I now face the ever demanding revision process, I find the challenge daunting. For one, my revisions come in a number of forms – some on paper, others on computer, and yet more simply rattle around in my brain. I hesitate to tell people it’s “finished”, when what I really mean is – it’s all on paper (the first writing hurdle, as I tend to skip around and leave places blank for later completion), and has gone through not one, but TWO rounds of editing.

And yet – it STILL needs work. 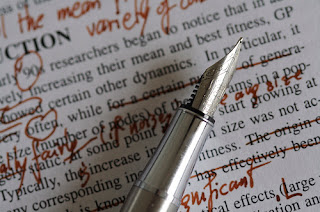 However, a recent debate with my friends over the value of James Joyce’s Ulysses got me thinking. Its first, and some believe most accurate, publication contains over 2,0000 errors. In fact, when published by Shakespeare and Company in 1922, Sylvia Beach added an insert that read: “The publisher asks the reader's indulgence for typographical errors unavoidable in the exceptional circumstances.”

Many question how Joyce could relinquish his novel with such blaringly obvious mistakes. To which I respond, they’re easier than one might imagine to overlook. For one, Joyce had multiple copies of his manuscript, and altered editing between them for no discernable reason. Furthermore, a good portion of the novel was handwritten as corrections on the original proofs, something I have a habit of doing myself. And more, Joyce rushed the editing process in order to complete it for publication on his fortieth birthday. All of these factors lead to the excess of mistakes in the finalized draft, which challenges editors even today.

But I think the truth is, a novel is never really finished. You could spend years trying to make it perfect, and still find mistakes and places you want to add to, subtract from, or cut out all together. So for now, I take comfort in the knowledge that greater authors than I make editing errors and pronounce my manuscript – COMPLETE!