K is for Kingdoms

I'm so excited that we've finally made it to the letter "K", because today I'm going to talk about two of my absolute favorite fairy tale adaptations (I say the word "favorite" a lot, but today I seriously mean it). And it all starts once upon a time, in a kingdom far far away . . .

Which is where today's post begins. With Kingdoms. Because every story needs a good setting, and the setting of nearly every fairy tale starts in an enchanted kingdom somewhere. And while all our favorite fairy tales probably don't exist in the same one, wouldn't it be interesting if they did? Certainly someone thought so, and thus began the creation of two absolutely terrific stories. 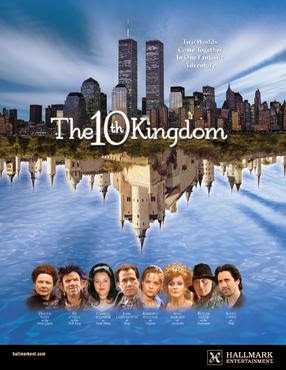 The first is the Hallmark Entertainment mini-series, The 10th Kingdom. It's the story of Virginia Lewis and her father Tony who are transported through a magic mirror from New York City to the fairy tale world, known as the Nine Kingdoms. There Tony and Virginia have to help a Prince thwart the Evil Queen after she turns him into a dog and places an impostor on the throne.

But the most interesting part about the mini-series it the introduction to all the Nine Kingdoms. They are as follows:
Cool, right? It's a great set up, and an even greater story. One which I highly recommend to any fairy tale lovers out there. Especially those who also like adaptations like Shrek. And speaking of Shrek, the next kingdom I'd like to talk about is the . . . 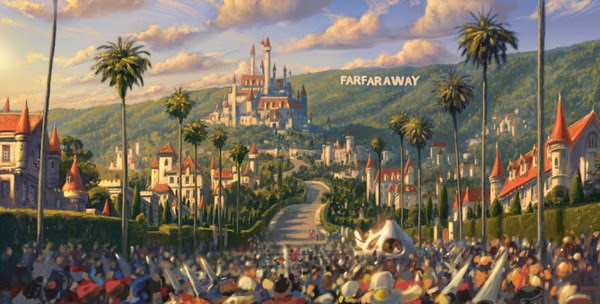 The Kingdom of Far Far Away. It is definitely one of the most clever kingdoms I've ever seen. Based on Beverly Hills, KoFFA is full of puns and parodies. As you walk up the main street (modeled after Hollywood Blvd.) you see stores such as Abercombie and Witch and Ye Olde Foot Locker. You can also check out the homes of the creme de la creme, like Cinderella and Sleeping Beauty. One look at it makes me think, screw California. I want to go hang out with Shrek, Donkey and Gingy at Baskin Robinhood or Farbucks Coffee!