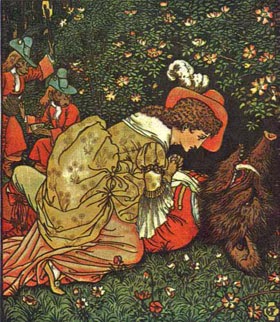 First published by Gabrielle-Suzanne Barbot de Villeneuve in 1740, and then again in 1757 by Jeanne-Marie Leprince de Beaumont, the story of Beauty and the Beast is one of the most enduring fairy tales of all time.

Unlike many of the other fairy tales we've come to know and love, Beauty and the Beast was actually conceived of and written by Villeneuve herself, though it can certainly be said that she drew on many folkloric elements.  In fact, it's roots date back even further to the Greeks and the myth of Cupid and Psyche.

All these stories and versions share a common theme - finding love that isn't based on beauty – as well as the transformative nature of love. But it is interesting to note the difference between the original Villeneuve version of Beauty and the Beast, and the later well-known Disney version.  Villeneuve's story was written for adults and thus dealt with more adult themes – such as marital rights and class distinctions – whereas the Disney version, tailored to a young audience, is filled with morals.

Disney on the other hand places emphasis on the Beast's transformation, from his monstrous behavior in the beginning of the tale into the loving and caring suitor he becomes. In Villeneuve's version however, the Beast's transformation takes a back seat to other plot devices (like destiny and fairy sabotage). He doesn't start out selfish like Disney's version – he simply refuses to marry his wicked governess (who was actually a wicked fairy called the Mother of Time), and thus found himself transformed as punishment. The Beast in this version is very much a victim himself.

Furthermore, Disney's Beast is cold and intimidating, insisting that if Belle will not eat with him then she will not eat at all; Villeneuve's Beast on the other hand, is polite and courteous to Belle from the moment she arrives at his castle. He has little need to change as he and Belle grow closer, whereas Disney's version begins to soften as he comes to love Belle, her love reaching out to his inner humanity.

It's in the big finale that the two stories really diverge. Predictably the Disney version focuses on a redeemed Beast who wins the love of Belle through selflessness and finds the curse lifted. Villeneuve's version on the other hand, walks a very different, and much more complicated, path . . .

Upon the Beast's transformation back into his princely self, his fairy queen mother decides that Belle (begin the daughter of a poor merchant) really isn't good enough for him anymore. Only to learn that Belle is actually the daughter of a fairy princess (the Beast's mother's sister in fact) and a king! When the Mother of Time (the same one that cursed the Beast) wanted baby Belle dead, they hid her away with the merchant by replacing her with his own dying infant daughter, and thus he raised her as his own. So in fact, Belle and the Beast are first cousins, both royal, and how fortunate, of the same social class. Yay for happy endings, am I right?

So in the end, while both the Villeneuve and Disney versions of Beauty and the Beast share a general premise, in reality the two are quite different. Disney deals with sugary sweet theme of physical and emotional make-overs, "outer beauty being more important than inner" et cetera, et cetera. Villeneuve prefers the more antiquated concern over social class and marital rights, all wrapped up in a fairy dust coating. But fortunately for both sets of Beauties and Beasts, they all live happily ever after. 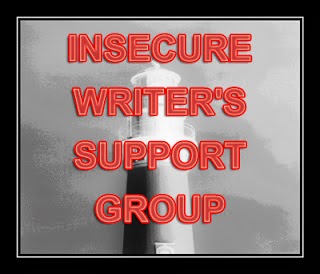 Today is not only Day 2 of the Blogging from A to Z Challenge, it's also the first Wednesday of the month, which means it's time for Insecure Writer's Support Group! If you're interested in joining, or just want to learn more about the group, please visit us here.

My insecurity for this month may be something many of you bloggers have wondered in the past . . . how many of my friends and family actually read my blog. Or any of my work for that matter. Now I know I'm something of a sporadic blogger, but I work hard to stay active at it. And I have to wonder how many of the people I love really take interest in what I have to say. I know there are some out there who check it regularly (and to those of you, it has meant so much to me over the years). Just as I know there are many who haven't checked it in months. Maybe longer. In the end it doesn't really matter. They all support me in one way or another. Just a nagging thought.

Anybody else having the same issues?

Good luck to all my IWSG friends out there!! (Especially the ones trying to make it through A to Z . . .)