L is for Little Mermaid 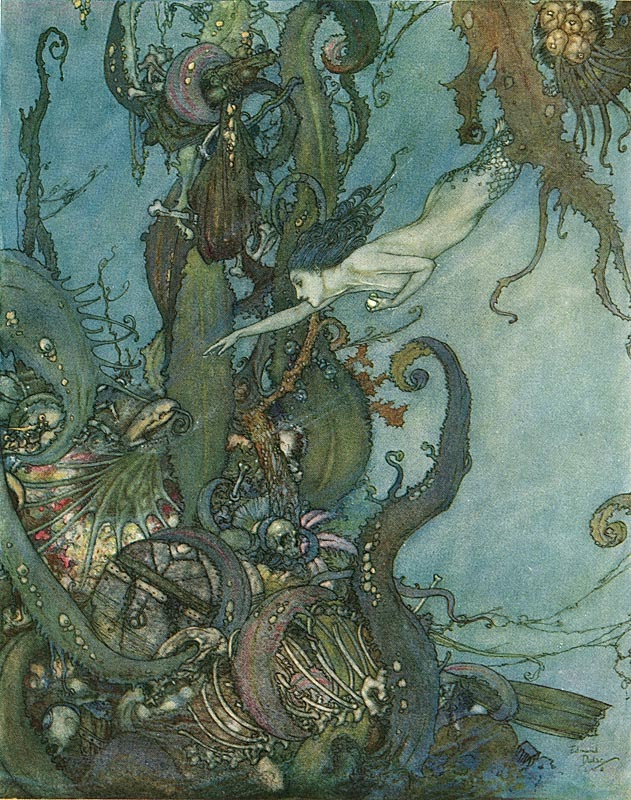 We're all familiar with Disney's version of The Little Mermaid, with it's talking crabs and catchy musical numbers. But the original version written by the famous Hans Christian Andersen is infinitely more complex. The two tales begin very similarly . . . Mermaid sees boy, falls instantly in love, mermaid saves boy from drowning. But from there the stories take very different paths.

In the Andersen version, the Little Mermaid tells her grandmother of her love, asking the difference between humans and the sea folk. The difference, she learns, is that while humans have a shorter lifespan than mermaids, they posses eternal souls that ascend to Heaven. Mermaids, on the other hand, do not posses souls and become nothing more than foam on the water when they die.

Much like her Disney counterpart, Andersen's Little Mermaid, longing to be with her prince, goes to the Sea Witch and gets transformed into a human. But when the prince marries a neighboring princess, the Little Mermaid's sisters raise to the ocean's surface and tell her that if she kills the prince and lets his blood drip onto her feet, the spell will be broken and she can return to her original form. Instead of murdering her true love on his wedding night, she throws herself into the sea and end her life. However, rather than becoming foam on the water like the other mermaids who have died, her sacrifice allows her to become one of the "Daughters of the Air" with the chance of one day earning a soul.

Thus the Andersen version becomes so much more than a "romance" story where a beautiful sea maiden must give up all she has ever known in the name of love. Instead, the story becomes one of transformation, of a soulless sea creature sacrificing everything – her body, her love, and even her life – to reach a higher state and earn an immortal soul. It's definitely one of the more complex of the fairy tales, and one which I think modern audiences are more willing to butcher in favor of the far simpler love story.