M is for The Metamorphosis

I was going to write about The Minority Report for the letter “M”, but since I’ve already written a post about that (see here), I decided to talk about Franz Kafka’s The Metamorphosis instead. ***Note to readers, this post has a fair amount of spoilers, so please read with caution. 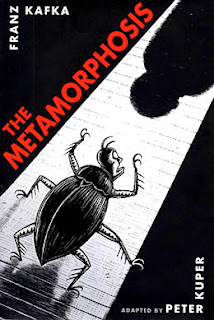 My first attempt to read the novella was somewhat underwhelming. It seemed dull and depressing, and I couldn’t help but wonder what all the fuss was about. But I read it for the second time earlier this year, right on the heels of Orson Scott Card’s Ender’s Game, and what Kafka was attempting to say finally hit home for me.

For those of you who aren't familiar with The Metamorphosis, the protagonist, Gregor Samsa, wakes up one morning to find that he’s been transformed into a giant insect. Personally I still wish Kafka explained how this happened, but that’s not really the point of the story. The 1986 film The Fly, however, is more than happy to make up the difference.

Anyway, The Metamorphosis focuses on the more poignant plight of a human being who, because of his new physical form and subsequent inability to communicate with his family, becomes alienated from human society. The alienation doesn’t happen immediately; for the first two sections of the novella, Gregor’s sister is very attentive. She assists his adjustment to life as an insect by moving around the furniture in his room and offering him different meal options as he no longer can tolerate eating the food he favored previously. However, as time passes she becomes more and more detached from him, to the point where she no longer believes her brother's mind exists within the beastly form. By story’s end she rejects him completely and tells their parents, “You’ve got to get rid of the idea that that’s Gregor. We’ve only harmed ourselves by believing it for so long.”

As you can see, Gregor’s story is a tragic one. The reader, who knows his thoughts even when his family does not, has to watch as he slowly becomes more and more insect-like in his habits while still trying to maintain some hold on his former life. At first he’s pleased when his sister moved things out of his room in order to free up more climbing space, but quickly becomes distressed at losing all of his former humanly possession. I find the scene where he tries desperately to save a single painting hung on the wall utterly heartbreaking. And as his family slowly becomes more and more repulsed by him, he longs to talk to them, to tell them he’s still there beneath the exterior. But he cannot, and his inability to communicate with them leads to his ultimate demise. 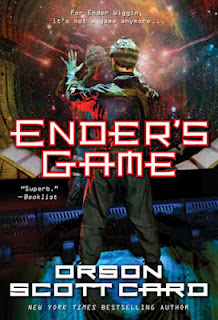 This concept of alienation through lack of communication is one of the things that struck me most about Ender’s Game. Humans and the alien Formics wage war against one another not because of duel need for natural resources, or hate, or attempted domination, but because they simply cannot understand one another. After Ender has defeated them in battle and then comes across an unborn Formic queen, she tells him, “We thought we were the only thinking beings in the universe, until we met you, but never did we dream that thought could arise from the lonely animals that cannot dream each other’s dreams. How were we to know? We could live with you in peace . . . If only we could have talked to you . . . Instead we killed each other.” Her speech - the first real correspondence between the the two races, emphasizes just how detrimental their communication barriers have been to their lives.

Major Spoilers: Unlike Gregor, the Formics at least find one person they can connect with in Ender. He becomes the Speaker for the Dead, and their hope to one day live again. He tells the Formic queen, “I’ll carry you. I’ll go from world to world until I find a time and place where you can come awake in safety. And I’ll tell your story to my people, so that perhaps in time they can forgive you, too. The way that you’ve forgiven me.” Thus he assures the Formics, and the reader, that perhaps there is hope for both societies to one day flourish side by side.

Though these two stories have decidedly different outcomes in the end, they each ask the same question: Are “aliens” really so different from us? Or is it our inability to communicate with them that alienates the species from one another? The question is not one simply born of science fiction, but relevant to the world outside literature. Culture clashes are a significant aspect of modern politics, and I sometimes wonder if all this conflict might not be a product of an inability to communicate.