Rachel Harrie at Rach Writes is hosting a First Campaigner Challenge! The contest is this:

Write a short story/flash fiction story in 200 words or less, excluding the title. It can be in any format, including a poem. Begin the story with the words, “The door swung open” These four words will be included in the word count. If you want to give yourself an added challenge (optional), use the same beginning words and end with the words: "the door swung shut." (also included in the word count)For those who want an even greater challenge, make your story 200 words EXACTLY!


The door swung open – just barely. Just enough for Riley to see a shard of light spilling across the manicured rosebush she currently hid behind in an effort to evade Bobby Flannigan. She sat back, heedless of her white dress but careful to remain out of sight.

What on earth was a door doing in the middle of the garden?

Was it there before? She hadn’t seen it when she fled the noisy party . . . had she? She couldn’t remember – but with a sudden urgency, she knew she needed to see what lay beyond.

“There you are,” Bobby said from somewhere behind her. “What are you – ?”

But she wasn’t listening. Heart racing, Riley stepped forward and reached for the blue door.

She pushed, and as the door swung open light flooded into the night, wrapping around her. Anticipation shimmered in the air and the world went quiet as she stepped through the wooden frame, leaving Bobby and the twilight garden behind her. When her eyes lit on the world before her, Riley knew her life would never be the same.

Her laughter echoed behind her as the door swung shut. 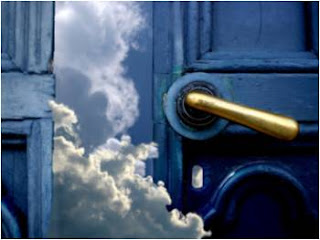