As I looked around at some of my favorite blogs today I couldn't help but notice the plethora of Halloween posts . . . which reminded me that I had been remiss in my own Halloween related posts this October. So I thought I’d rectify this problem by participating (last minute) in TWO bloghops.

The first is YA Highway’s Road Trip Wednesday. It’s been a while since I've participated, but when I saw the topic for this week’s post, I couldn't resist: What's your favorite scary book or movie?

I must admit that I’m somewhat of a wimp when it comes to scary movies; I’m the one hiding under a blanket when the creepy parts happen. However, I do have fond memories of watching The Poltergeist with my parents when I was in 8th grade. We watched it around Halloween time and it terrified me to no end. To this day I’m a little nervous around old-fashioned TVs and I can’t shake the fear that I’ll be suck into one.

Despite my anxiety when it comes to horror films, I’m a big fan of the classics thrillers – specifically Alfred Hitchcock’s. Movies like The Birds and Psycho keep me on the edge of my seat, eyes glued on the screen the entire time. He’s a real master of suspense and I love his creepy classics.

As for scary books, I’m going old-school Stephen King with this one. Probably the scariest book I’ve ever read it the 1977 classic The Shining. I watched the movie when I was in middle school and then decided, since I guess I just hadn’t quite terrified myself enough, that I’d read the book. And boy was I ever not able to sleep for a month. And this may sound crazy, but the book’s warning about room 217 terrified me so much that I have since made a solemn oath to never stay in room 217 (or 237 – thanks to the movie) at any hotel. Ever.

Some call me a wuss – I prefer to think of myself as appropriately wary of the supernatural . . .

The second bloghop is the aptly named Halloween Bloghop hosted by the amazing Jeremy Bates. If, like me, you’re only just stumbling upon this, check out the details here.

As I mentioned the other day, I’m a fan of the monster genre – therefore I have a quite extensive list of favorite monster books and movies to choose from. However, if I’m only able to pick one of each, then I think I have to go with Frankenstein by Mary Shelley and Buffy the Vampire Slayer. Technically I’m cheating a bit with Buffy, since I’m actually referring to both the movie and the TV show created by Joss Whedon, but I figure it’s a day for tricks (and treats), so it’s okay. Buffy the Vampire Slayer was my absolute favorite show in middle school, and remains at the top of my list to this day. I love that she fights all manner of monsters and demons as well as vampires, and that she saves the world time and time again with the help of her “Scooby Gang”.

As for Frankenstein, I was greatly affected by it when I first read it in 9th grade. Shelley’s masterpiece manages to be both darkly terrifying and somehow poignant at the same time. I can’t help but feel pity for Frankenstein’s monster, even as he commits atrocious acts of violence. I truly believe that it’s one of the best novels ever written.

Last but certainly not least, Halloween costumes! Though I usually do my own thing in terms of costumes, but this year my friends and I decided that we’d all go as superheroes together. I, of course, lobbied that we all go as Marvel characters, but we wound up with an unfortunate mixture of DC heroes as well. Still, we looked pretty awesome in our costumes and had a great time fighting crime . . . uh, celebrating the holiday at the Natural Science Museum’s epic party. It's always fun at the museum since people there are pertty serious when it comes to Halloween. The guest list reached nearly 4,000, all of whom were trying to top each other's costumes, so you can imagine how amazing some of them were. Definitely a night to remember. 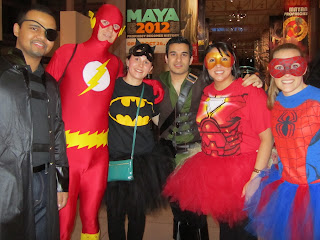