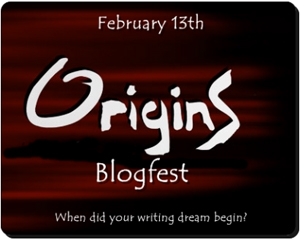 D.L. Hammon over at Cruising Altitude 2.0 is hosting a new blogfest . . . the Origins Blogfest. Those of us participating are supposed to write about how our dreams of becoming a writer began. So, here's my story . . .


As a kid, my dream was NOT to be a writer. In fact, I never even considered it. Instead, I dreamed of being a ballerina, a marine biologist, a photographer . . . a superhero. A resistance fighter during the alien and robot invasions.

I dabbled in a lot of different interests, trying to figure out what I wanted to be when I grew up, all the while carrying a notebook where I wrote down story ideas. I was always making up stories. I blame my mom for that one; whenever we’d be out running errands or eating at a restaurant, we’d invent wild stories for the ordinary people around us. You’d be amazed at the number of spies we encountered. And runaway princesses. Even a cylon or two.

I’m embarrassed to say that, though I began three different novels between sixth and eleventh grade, it still never occurred to me that I was writing. It was just an extension of the games my mom and I amused ourselves with. Stories were just . . . there. A way to keep a bored, only child entertained when my friends were too busy to come over and play.

Meanwhile, I continued to test out different skills, searching for a vocation. Ballerina was quickly nixed; I preferred soccer practice. Marine biologist, definitely not; I hated science classes.  Superhero . . . I still haven’t entirely ruled that one out.

I wasn’t until my senior year of high school that I finally comprehended the importance of the notebooks I was constantly scribbling in and thought, well hello. That my idols – J.K. Rowling, Mary Shelley, Madeline L’Engle – they, too, probably kept notebooks with mad scribbles and bits of dialogue. And so I decided that’s what I wanted to be when I grew up. If I ever do.