A is for Asimov and Automatons: Questioning Robot Ethics

It's April 1st and that means it's finally time for the Blogging from A to Z Challenge 2012. For those of you who missed my previous post, my theme for this challenge is Science Fiction! Here is my very first post of the contest, and today A stands for Asmiov . . .

Science Fiction writer Isaac Asimov - considered one of the "Big Three" with Robert Heinlein and Arthur C. Clarke - is perhaps most known for his Three Laws of Robotics. Created as a safeguard against human injury at the hand of our creations, these laws state:

1) A robot may not injure a human being, or through inaction, allow a human being to come to harm.
2) A robot must obey orders given to them by human beings, except when such orders conflict with the First Law.
3) A robot must protect its existence as long as such protection does not conflict with the First and Second Law.
*** 4) or 0) A robot may not harm humanity , or through inaction, allow humanity to come to harm. (This law was introduced at a later date.)

However, robot ethicists have argued that these laws are unethical because they take away autonomous beings' free will; they believe that robots need to develop their own ethical code, rather than have one written for them. This at first seems absurd, especially in light of movies like The Terminator where robots are intent on wiping out humanity. Films in which I’m sure the characters were thinking "now would be a really excellent time for a few laws of robotics". And when we think about it, robots aren’t living creatures, and therefore don’t deserve the same right as human beings . . . right?

And yet, if we’re giving them the right to life, do they then not deserve, like all beings, free will? Could they not merely be considered the next wave of evolution? Just as human beings were once the newest evolutionary phase, don’t robots then deserve the same chance at a life of freedom and choice? When god created mankind, he instilled within us an ethical code (much like Asimov's Laws); but he also allowed us the free will to override it should we see fit. Do automatons not deserve the same? 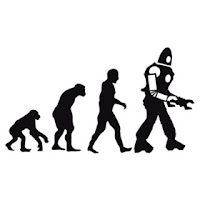 Human beings have gone through a long road of evolution to reach our modern principals of morality – we once believed slavery was not only morally acceptable, but industrially necessary. It took a span of many  years to reach the conclusion that this was not in fact the case. Should robots, even knowing their potential threat to humanity, be denied this same evolutionary process? Does it make us unmoral as creators, to disallow this for our created? Or is it our responsibility to ensure peace? Can we even do that, knowing how destructive and un-peaceful humanity is?

God knows I never thought I, who am terrified of terminators and weary of technology, would be advocating for robot rights.

Perhaps we can only imagine a destructive race of articficial beings because we, the human race, are ourselves so destructive. Therefore, we fear that what we create will be similarly instilled with the seeds of destruction. Much as we pass on many of our own beliefs and prejudices to our children. Perhaps we should wait until we’re a more peaceful race before we introduce another . . . though in that case, we’ll be waiting an awful long time. I fear that technological progress far exceeds the speed of moral progress, and no amount of Robotics Laws will ever change that.